Allow me to make an assertion. Nobody knows what the truth is. No one has the kind of satisfactory access to the universe which allows them to determine any kind of absolute truth. This means, in turn, that anyone who tells you they know the truth of something is at best mistaken and at worst outright lying.

The Truth vs. the truth
When we talk about things being true, it seems like what we’re really talking about is whether or not we should take things to be true. How many times do we think 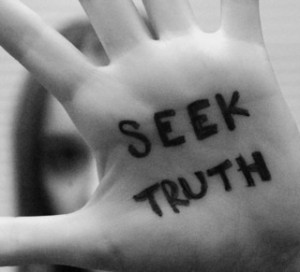 something is true only to find that there’s some contradictory evidence? I used to believe in Santa Claus, to the point where I would lay traps for him in the living room in the hope of capturing his toy sack, until I noticed that he and my mother had the same handwriting. I took it to be true, but was required to change my position based on new evidence.

What We Should Take to Be True
To put it simply, we ought to take to be true that which we have the best reasons to believe. That seems pretty reasonable, right? You’re not going to say to yourself “Well, I don’t have any good reasons to think this is true, but I think it’s true anyway,” because if you think it’s true, you’re going to have to act on it. When we get into discussions about whether or not something is the truth, what we’re really asking is “What reasons are there to believe this?” And above, where I said that no one has access to truth, it’s because I have very good reasons to think so.

We Are Already Doing This
Imagine if someone did have access to the truth, and told you what it was. It seems like one of the first questions which comes to mind is “How do you know that’s true?” You want to know my reasons for it, why I take it to be true. Even with something as controversial as a revealed truth, it’s still intelligible to ask how we know it’s true. We does this every day in our daily lives, whenever we try to get confirmation about things which are going on around us, and it’s the very essence of critical thinking.

Three Good Reasons
Here are three good reasons to believe something is true. The best propositions, such as the law of gravity, or evolution, but also more basic things like whether or not it’s raining, will have all three going for them.

Verification
The ability to independently verify, touch, handle, and see a thing from all angles. Things like physics and biology fall under this umbrella, but also archaeology, geology, and paleontology, anywhere that physical evidence is paramount. Sociological facts are also verifiable, though it can be more challenging due to their reliance on the personal experiences of others.

Consistency
It’s important for something which we take to be true to be consistent with our other evidence. Once, I believed that Santa had a workshop at the North Pole, but if I had gone there and found nothing, that would be inconsistent with my previous belief. Only one of those can be true, and not seeing the workshop would have the benefit of verification, forcing me to look for more evidence if I want to continue believing in Santa.

Inference
Some things are true in virtue of other things being true. For example, if it’s raining, then it’s cloudy. Which is to say that if we verify that it’s raining, and know that rain is consistently accompanied by clouds, then we have good reasons to infer that it’s cloudy, even though we haven’t verified that there are clouds. This is also how surprise parties work. You have no good reasons to infer that a bunch of people will be waiting at home with balloons and cake, and so you’re surprised when it happens.

Not True? Not the End of the World
We’re wrong all the time. Part of this blog is about being wrong, for that matter. We misjudge how many steps there are on a staircase, or how much time we really have to make it to work. We’re wrong about bigger things too. I used to think it was true that we only used ten percent of our brains (it’s not), and then I found evidence which demonstrated otherwise. How we react to that is up to us. We can see it as a crushing defeat because one of our favourite truths has been shattered, or as a great moment where we get closer to something resembling actual truth as we acquire better reasons to hold a new position (Alternately, we can cling obstinately to our old position in the face of any new evidence, but I’ll save that for another time).

So?
We use these reasons instinctively every day. We verify that we have our keys before we leave the house, and consistently expect our toast to pop up at approximately the same time. If we see wet sidewalk and people with collapsed umbrellas, we infer that it’s been raining. Becoming conscious of the process and applying it to our more sophisticated beliefs allows us to test them and take things to be true which are more reliable than what we had, and more reliable is usually better for us. It also gives us a window into how to deal with conflicting truths, a situation we can run across everywhere from the classroom, to the workplace, to the bar. Having a system in place to analyze reasons can allow both parties to walk away with better reasons, rather than just proclaiming their correctness at an ever-increasing volume.

What do you think are some other good reasons to believe things are true? Are the reasons presented here good ones? What kinds of things have you been wrong about, and how did you handle it?