Earlier a I wrote a post on why safe space is important over at TPK, and it got me thinking about language and the way we use it. To sum up the post, I think that safe space is an important thing to have at the gaming table because it lets you express yourself without reservation or fear of exclusion, and I don’t think that, within the context of the game, there’s anything you shouldn’t feel comfortable doing in a safe space. But the issue that always comes up is what happens when people use that safe space to do inappropriate things or commit to inappropriate ideas. I go into it a bit, and you can find it there, but here I want to focus on what we consider bad words or inappropriate language, because I don’t think there’s any such thing. 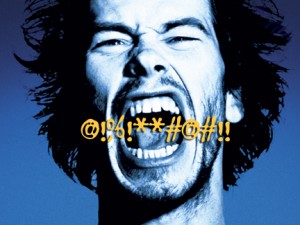 It certainly seems like it though. We have all kinds of bad words, four letter words, coarse language, filthy words, barracks language, and other ways of talking about it. George Carlin had several routines based on just that, which are pretty thoughtful (that link is probably best left unclicked if you’re at work. I may not believe in bad language, but I’m not your boss. Though, if you bring this post to their attention, let me know how it goes and how I can make it better). I’m not going to argue that it’s always the best way to communicate meaning, merely that it ought to be an acceptable way, especially if things like safe space are a concern. I want to handle this by taking a look at some of the arguments made for the existence of bad words, and seeing how they fall short.

The argument which comes up most often that some words are bad words, either due to their etymology, their history, or the rules which we have in place. Concepts like obscenity often enter into this argument, but it can also be seen as an argument from utility. A simplified version might be: using word X is against convention, if I use words which are against convention then it will impede my utility, therefore I shouldn’t use word X. There are certainly words which carry a social stigma with them, but the argument from bad words fails to address why, beyond the notion that there is a set of people who do not like those words.

Another argument I hear is that they represent an unsophisticated use of language, and that they’re not necessary. And that’s true, but it also isn’t an argument for why they should be unacceptable entirely. Sophisticated language implies elegant expression of meaning. If someone says to me “Were your moral character alive, it would be a fetus spilled forth from the womb too early, riddled with cancerous pustules and croaking its first and final breath,” that’s more sophisticated than just calling me a bastard, but it means the same thing. I don’t think that someone who is arguing against the use of bad language really wants to come out in favour of one or the other. It seems strange to argue that it’s okay to be dicks to each other, as long as we’re classy about it.

The argument from harm is probably the best argument for their unacceptability, and it states that certain language is actually harmful when used. Examples of this include swearwords, but also slurs and other hatespeech. Because of the harm that these words cause merely through their utterance, we shouldn’t say them. I hold this to be different from the argument from bad words because, for the argument from harm, even if it were the case that convention made these words permissible, they would still be harmful. But that doesn’t seem to be the case. For example, let’s think about the word “Nigger”. It’s easily recognized as one of the most historically harmful words in the English language, and I think we can agree that we ought to never use it, right? It devalues a person based purely on their race, which is something we ought not to do. But does that mean we can’t use it ever? If we talk about its historical context, or its use in The Adventures of Huckleberry Finn, or even advocate against its use, like Julian Curry does, can we use it then? We can use substitute words, like “The N-Word”, but does that change anything? We all still know exactly what word we’re talking about, and if I shout “You’re an N-Word!” at someone, it doesn’t seem like that makes it any better, any more than using freaking, frigging, or f’ing instead of fucking is. What the argument from harm illustrates is that we need to acknowledge the power that certain words have to wound if we use them in certain contexts, and while it makes a very good point (I’d even go as far as saying we ought never to use words to wound), it’s not a good argument against using the words at all.

In essence, words are part of communication, and communication is about the transmission of meaning. We hear what people say, and from that we try and figure out what they mean, because it’s what they mean that matters to us. If it’s what they mean that matters, then the actual words they use shouldn’t be as important. What we’re watching out for shouldn’t be bad words, but bad intentions and most common words that we consider inappropriate don’t have those necessarily. If I stub my toe and cry out “Motherfucker!”, I’m using the word to express my displeasure at what’s just happened. If I call someone a motherfucker, I’m making a statement about them. They mean two different things. If I instead yell out “Ow!” or call someone a jerk, they express the exact same sentiments, but we’re somehow more fine with those words. We use so-called bad words as intensifiers in some cases, or to indicate our level of comfort with the people we’re around (which is why you’d feel more comfortable swearing with good friends than in church).