I’ll finish the story on Wednesday, but there’s some things I need to get through. I’ve been dancing back and forth with my landlords for months as they dig for reasons to get us to move out, in order to jack the rent like they did with the place upstairs. I’m not upset about that, it’s their job to push up their bottom line, and their methods are consistent with those of other people who rent out run down buildings in the inner city. I’m not going to call them out or complain, everything they’ve done is within the bounds of the law, and when I cite the law to them, they comply. I can’t ask for more than that. But today, after three months of them hinting at it, they gave us official notice. We’re out by the end of January.

Thing is, we’ve lived here for fifteen years. When you’re low income, that’s a long time. Most of it we did making minimum wage, or scratching and saving to make ends meet. And in three months we’re gone. It’s not that big a deal. We’re doing okay financially, and we can find a place that meets our needs and is within our budget, sites like kijiji are great for that. But one of the things I was faced with when thinking about it was the prospect not just of leaving the house, but leaving the neighborhood that’s been my home for twenty-one years. I played ball hockey on these streets when I was eight years old, and went to schools within ten blocks of my house. My mum worked at the local convenience store for fifteen years, and got to know everybody in the neighborhood. I remember when you could canoe in the lake at the park. I live in the downtown core of Kitchener, Ontario, and when people I go to school with find that out, they often ask “But, isn’t it dangerous there?” It’s instant street cred. 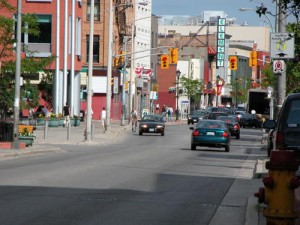 When I ask them what they mean, they talk about the weird people they see there, and the crazy things they do, about the dirty architecture and the graffiti. But those people are more than faces. They have names and stories, some of them I know, and some of them I don’t. I look at the architecture and I see the history of this city, from the old factories that stand as a testament to our industrial roots to the rows of houses, each built at slightly different times, each with small variations, making the streets a collage of eclectic architectural details. Is it dangerous? I can’t say, but I can say that we’ve never felt safer. My mother can go for a walk at two in the morning without the slightest bit of fear. No one bothers her. In twenty-one years, no one ever has. Nor me. When I see someone at night, they’re usually a local. I don’t know them by name, but I’ve seen them around. Sometimes we nod, sometimes we don’t.

Every street corner here has a story, some of them going back fifty or sixty years, and in a place steeped in so much narrative, it seems like there’s a great opportunity to build a community around it, and I’m not just talking about the new condo crowd. We don’t live in condos. We live in uppers, or additions, or ramshackle houses. We’re artists, cashiers, bartenders, and bus drivers, and we’ve all had times where we’ve done whatever we had to to get by. We’re downtown people. I used to joke about that, but I noticed one day that people panhandling downtown had stopped asking me for money. They saw me enough, they knew I was local, and that I had my own concerns. They knew, even if I didn’t that I was downtown people. Having to move out of my home, and thinking about moving away entirely, has really brought that into perspective. I am not done with downtown, and it is not done with me. I look forward to spending many more years here, and sharing the stories with those who come after.