I’ve got a pretty busy week ahead, including my first musical gig at a Movember benefit, which means I’ve had to delay things a bit. I won’t leave you with nothing, though. I’ve shared philosophy poems before, well, this is a philosophy story. I wrote it a few years back, when I was doing a lot of thinking about expectations and how we manage them, as well as taking a course on children’s literature. Without further ado, I offer you the First and Only Adventure of the Amazing Charlie Button, part 1.

Trains, I wrote. Trains were mysterious and wonderful in a sort of impressive way. Trains were also underappreciated in literature, I thought. Huckleberry Finn never rode a train anywhere, though he did have a raft. But rafts were so rural, and one can’t very well ride a raft in the city. Perhaps a very tiny one, negotiating rain-filled gutters and dark, scary sewers, but a person would need to be awfully small to engage in such an adventure. Tiny rafts, I wrote. You see, I was in the midst of writing down every incredible, wondrous, and mysterious thought that entered my head, a lexicon of all things grand. It was for my career, you understand. Unlike my friends, who dreamt of being knights, pirates, or astronauts, I was going to be a writer. I had perused the works of Kipling, Tolkien, Twain, and many other authors which some considered to be well beyond my twelve years of age. Enough talk of reading, however. This is the tale of a writer, of one Charlie Button, soon to be known to the reading world as Stephen (or Henry, I hadn’t quite decided) Shakespeare, Esquire. At least, that was the plan, but things seldom go according to plan. And what I mean by that is, as I penned the words “Tiny rafts” on to my foolscap, I heard a noise.

Thump. Thump. Oooooooaaaaaaagh. Living in a townhouse, thumps were to be expected from time to time, but never before had they rattled the photos on the wall. Thump. Thump. I waited, straining toward the door of my bedroom, for that mysterious sound which did not belong, but nothing came at first. Then, a crunching noise, followed by what was distinctly a sound of disgust. Being a curious and adventuresome boy, I ventured downstairs to take a look. I had faced Shere Khan with Mowgli, and bested pirates with Jim Hawkins. No amount of thumping or scoffing would frighten me. However, as a writer must be honest with his audience, I will admit that when I saw a hulking brute clad in tweed munching on my mother’s wax fruit, I did feel a tiny pang of alarm. Nonetheless I seized the moment, drawing myself up to my full height and interrogating the creature. “Who,” I asked, “are you?” 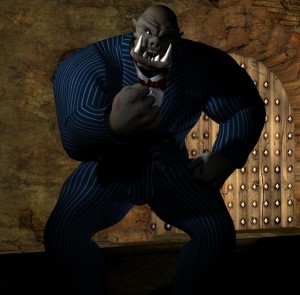 The entire house creaked and groaned as it turned, and two bloodshot red eyes settled on me as it answered in a deep, booming voice. “Pwilfred, and this is the worst fruit I have ever tasted.”

“Wilfred?” What a strange name for an ogre. I recognized it now, of course, being well-versed in all things fantastic and mythological. But who ever heard of an ogre named Wilfred?

Whatever he was about to request was lost as the floor of my poor home gave way beneath his feet, sending both of us tumbling downward into an odd blackness. One would think that one would simply fall into the basement, and not commence plummeting through some kind of eternal darkness. This was not a pleasant fall like the one Alice had, but rather a quick descent, the kind that usually ends with one spread all over the landscape. However dear reader, as you surely know, I survived. Despite being an ogre, there were parts of Pwilfred that were quite soft, and I was lucky enough to land on several of them. 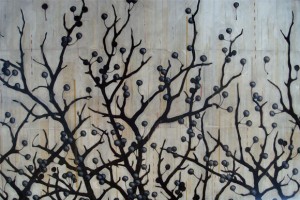 “Well, this is a fine mess,” Pwilfred grumbled, setting me down on the forest floor. Did I say forest floor? Because that’s where we were, surrounded by massive trees and piles of crunchy red and yellow leaves. Somehow I knew this place, as if I had been here in my dreams. It was the Forest of the Lost, where all lost things go. Under the leaves lay various socks, pens, cigarette lighters, and marbles. The upper branches of the trees were fraught with tangled balloons in a rainbow of colours, and each leaf of the small shrubs and ferns was decorated with a set of keys, a strange metal Christmas in autumn.

“Then you’ve clever dreams, boy. Do you know the way home?”“I know where we are,” I said, putting on a brave face. We were very lost, and things that are very lost tend not to be found. I was definitely going to be late for dinner. For that matter, I couldn’t be sure there were going to be any more dinners. There didn’t seem to be any lost food about.

I must confess that I did not, and I told him so. At first I was thrilled at the prospect of an adventure, but sobered at the memory of my mother’s words on just this subject. I was not a boy permitted to have adventures, because adventures would trouble my mother. All of the boys in my books, Peter Pan, Mowgli, and the Wart, had no mothers to worry over them, and so were free to do as they liked. But there I was, on what looked suspiciously like an adventure.

We began to walk, and I assaulted Pwilfred with questions, a little put out at being forced from my home and into this place by an ogre who clearly knew little about being an ogre. He didn’t even have a club. And what self-respecting ogre wore tweed? Moreover, there was the worry of just where we were going and how we had gotten here.

Pwilfred (an Oxford ogre it seemed) was kind enough to explain what he knew. He had been invited for tea in the House of Doors, and was on his way there when he passed through the dining room unintentionally. Feeling tired and a little hungry, he paused to snack on the fruit that he’d found, unaware that deviating from his course would consign him here. If we could just find a door, his invitation could bring us home. But who loses a door? In the meantime, we simply walked, trudging over thousands of miscellaneous screws and bolts from bedroom sets looking for a lost door. The perpetual silent gloom of lost things hung heavily all around us, but up ahead, in a sliver of sunlight, was something amazing.