Inspired by my first post on Superman, and the Things I Read in Comic Books, I’ve wanted to do some posts to go a little more in depth on some of the things I’ve learned from other odd comic book characters. Bits of philosophy that don’t necessarily emerge from little quotes that fit in the top bar, but from their actions, or my interpretation of their actions, at any rate. I want to take strange things and see what we can learn from them, and how those lessons can be valuable. But it’s not just comic books and philosophy, no, today is a triple dose of nerdity, because at the bottom there’s a new D&D; inspired song for you to enjoy.

Click below to find out the inaugural character of this sure to be a hit new series. 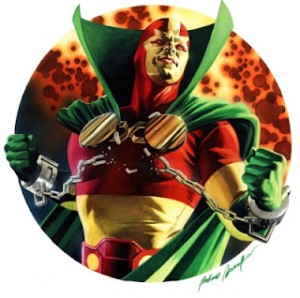 Mr. Miracle! For those of you who don’t know, Mr. Miracle was a superhero created in the 1970’s by none other than Jack Kirby, one of comic book history’s all time greats. But I’ll do a Jack Kirby post another day. Scott Free is the world’s greatest escape artist, and grew up on another planet which is practically the definition of bleakness and despair. Travelling to Earth, he fights crime as Mr. Miracle. Naturally this involves him getting stuck in elaborate deathtraps and then escaping from them. He often does so with the help of his mentor Oberon, and his wife, Big Barda, who is also a superhero. He’s not the only escape artist superhero of note, the other one I can think of being the Escapist, first written about in Michael Chabon’s The Amazing Adventures of Kavelier and Clay, and then later featured in a short series (which is brilliant, and I highly recommend both the book and the comic). But what can we learn from him?

Sometimes I feel trapped, and I don’t think I’m alone in that. Not just in a job, or a situation, but stuck in a rut of my own making, where I’m just spinning my wheels. Well, the focus of the escape artist, real or fictional, is extricating themselves from situations they don’t want to be in. This usually involves forcing themselves to think in innovative ways using the tools they have at hand or can prepare, and it can also involve a bit of pain. For example, there’s no trick to a straitjacket escape. You have to dislocate your own shoulder and snap it back into place to get out. I think about that when I feel stuck sometimes. I have to be willing to do what it takes to get out, and accept the consequences. How can we escape? The same way Mr. Miracle does, by thinking outside of our usual paths and being willing to take calculated risks. And we need to understand that not every escape is free and clear. It can mean leaving something behind.

How to Spot the Trap

There are some things from which we don’t need to escape. Mr. Miracle is married, and 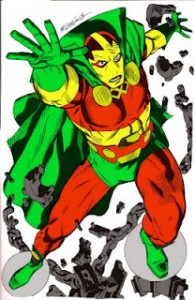 one could say he’s a prisoner of love, but that doesn’t mean he needs to escape from it. For him, the traps are things which are harmful to himself or others, and usually consist of laser, sawblades, gas, mind control and a myriad of other methods of murder and mayhem. In our distinctly non-fiction lives, we might be best served by thinking of a trap as something which harms our interests. It could be a situation, a job, a behaviour, or even just a way of thinking. And it’s not always other people doing the trapping. I find that the most cunning and hardest to escape traps are the ones I lay for myself without even knowing it. I create barriers for myself, or fall into unhealthy routines, little things which are hard to notice, let alone escape. But when I think about Mr. Miracle, I’m thinking about a life outside barriers.

There’s Always a Way Out 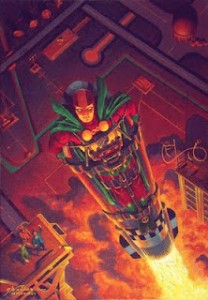 So that’s Mr. Miracle, the world’s greatest escape artist, and what I’ve learned from him. He represents the lighthearted hope of getting out of stuff we don’t want and into things we do, not willy-nilly or as a show for a crowd, but with a mind to the welfare of ourselves and others. Some I imagine, in the abstract, a life where I’d removed myself from barriers that would hold me back, especially those of my own making. I ask myself who I’d be if I had that, only one answer comes to mind. Scott Free. I don’t know that I’m there yet, or that I’ll ever be, but every day is a new chance to try harder.Or at least we can hope there is. The most important lesson I see in Mr. Miracle is that we should never give up. If we think there’s no hope of escape, we have no good reason to try. He has a lot of resources when it comes to being trapped. Alien technology, his own mastery of the art of escape, enhanced physical abilities, partners, and membership in the Justice League. But we have our own resources. We can draw about our skills, about the people we trust and rely on, and our previous experience. They’re more mundane, but our traps are more mundane (at least, no one’s ever turned poison gas and lasers on me, let alone sharks). It’s true that sometimes there isn’t a way out. Most situations aren’t as cut and dried as a comic book. But if we won’t hope, then we won’t look.

And as promised, a new song! This one is the Satyr’s Ballad, which I wrote over a weekend a while ago, inspired by a character written in the background of one of my player’s. Being a satyr seems to be about falling in love (or lust, at least) with all manner of people, so I thought it’d be interesting to have a satyr who didn’t do that, out of the idea that loving one person made it more precious to him. I’m not saying that’s a philosophically well-grounded idea, but…Just give it a listen.