So now we’ve talked about the prisoner’s dilemma, and how iterated versions of it can change what’s rational to do. But what I didn’t talk about last week was, given an iterated prisoner’s dilemma, what’s the rational thing to do? When you have to trust someone over and over, what sort of strategy works out the best in the long run? It should come as no surprise that I’m not the first person to think about this, and I’ll be drawing on a lot of the work of Robert Axelrod, who ran a contest around 1984, where hundreds of people submitted strategies to be pitted against each other. A lot of this is Axelrod, mixed in with some Batman. Why? Because Batman.

First, a bit about the contest. Each strategy was pitted against the others in a computer simulation, with each one playing one of the roles in the dilemma. The beauty this is that the results of each strategy are measurable. A good strategy is one that creates the greatest benefit for the player, which can be measured in how many years a player spends in prison, say. There are a lot of interesting questions that come about as a result of this, which inform the strategies. What do you do if someone defects? Should you focus on besting the other player, or on trying to cooperate with them? What do you do in the first instance, when you haven’t had a chance to learn anything about the other player? There are a lot of strategies which have been submitted for this over the years, but here are a few of them. 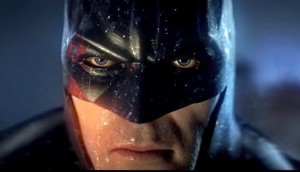 Batman is an interesting case. He always cooperates, until the other player defects. Then, he does nothing but defect, determined to punish them for their mistake. He cannot forgive, and it isn’t clear whether or not his interest is in overcoming the other player. Like Batman in the comics, this strategy turns on a single tragic event. Batman plays very well with Leslie Thompkins and Harvey Bullock, not not very well with the Joker and Two-Face, as you’ll see.

Friend of the Wayne family and committed pacifist, Dr. Thompkins always cooperates. No matter how often someone defects, she forgives them and continues cooperating. She has no interest in besting the other player. No matter what the stakes are, she does not defect, which means that she does very well with Batman or Harvey Bullock, but loses out greatly to the Joker. 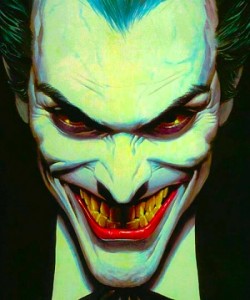 The strategy of the Joker, who needs no introduction, is Leslie Thompkins’ evil opposite. He always defects, seeking to gain an advantage over the other player. He does not forgive, and rewards cooperation only with further defection. Against Two-Face or Leslie Thompkins, he fares very well, but when run against Batman or Harvey Bullock, everyone is worse off, because he creates a cycle of defections which does not end. 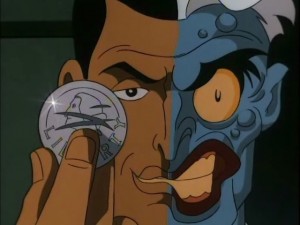 Two-Face is actually an abstraction of a number of strategies which involve defecting at certain intervals or random occasions. For Two-Face, there’s roughly a 50/50 chance that he defects, governed by the toss of his coin. He doesn’t punish, because his actions aren’t sensitive to the other player’s. He loses out to the Joker and to Batman, but comes out ahead against Leslie Thompkins, and breaks even with Harvey Bullock. 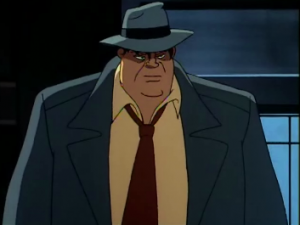 Harvey Bullock is a hard nosed police detective with a self-interested bent. He’s a stand up guy, as long as you’re one to him. His strategy, known famously as tit for tat, is very simple. Cooperate at first, and then do whatever the other player did in the last round. Someone who defects is immediately punished, but also forgiven, provided they begin cooperating. He doesn’t seek to best the other player (as the best he can do is break even with them). Against Batman and Leslie he gets great results (no one defects), against Two-Face he breaks even, and against the Joker he loses out slightly because of the initial cooperation.

The Coles notes of this is that Harvey Bullock’s tit for tat strategy gets optimal results in these cases, because while it never wins out over the other player, it provides an incentive for each player to break even. I want to spend some time on what this means next week, when we do a Prisoner’s Dilemma wrapup and bring this Batman back to Marilyn. But don’t take my word for it that these strategies perform like I say they do. Here’s a site where you can run your own iterated prisoner’s dilemma simulations.