I just got back from Kalamazoo and the International Congress on Medieval Studies, which always puts me in a bit of a medieval frame of mind, so I thought I’d talk about something medieval that fascinates me. Thus, knights. I should stress that this has little or nothing to do with actual historical knights, but rather the ideas we have about knights and chivalry. The medievalism, rather than the medieval itself. Thinking about knights reminds me of important things that, to my chagrin, I sometimes forget. 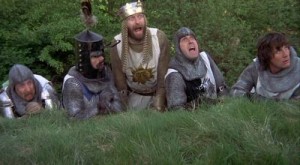 The knight is often the quintessential good guy. Indeed, that’s a big part of the idea in the tales of King Arthur, is that genuine knighthood, is something that goes beyond having a sword, armor, and a horse. It requires adherence to principles which we’d generally endorse as pretty alright. Chivalry gets questionable around ideas like weakness, but things like helping those in need and pressing for justice instead of mere legality seem like good ideas. We talk about people as playing the knight in shining armor, sometimes with irony or sarcasm but often being someone’s knight in shining armor is a pretty good thing to be. There are three things that come to mind immediately when I think about knights, traits and behaviours that seem worthwhile.

Knightly honour is self-directed, I think. It’s about adhering to a standard of goodness even when no one else is looking. Scratch that. Especially when no one else is looking. When the opportunity arises and someone says “Who would know?” the knight has one answer. “I would.” Acting with honour is about making a commitment to upholding your principles. Knights remind themselves of this through rituals like vigils and recitations of their oath, and we do similar things, reminding ourselves of our commitments and the reasons we hold those principles. The fact that it’s a knightly trait fascinates me in part because it’s one of the biggest problems that ethics faces, as you saw with the Prisoner’s Dilemma. How do you convince someone to do the right thing when they have everything to gain by not doing it?

Unlike honour, respect focuses on how knights treat others. There’s an emphasis on courtesy and humility that I find really interesting, and that maps on to a lot of behaviours we practice, whether that’s notions of saving face or networking principles. Moreover, it’s a commitment not to be courteous for its own sake, or out of regard for consequences, but because people are worthy of respect. We can see this in the way that knights respect their enemies. there’s definitely a link here to Judeo-Christian “Turn the other cheek” values, but that isn’t the only justification for it. If you can be relied on to respect others, it’s a big part of being trustworthy, and trustworthiness is linked to honour.

Valour is a two part thing that’s rooted in courage, but goes beyond it. The first part is that knights intercede when they see others in need. Whether it’s giving somebody a jumpstart or pulling them out of a fire, it’s knightly to exercise courage on behalf of others. The second part is that because of that courage, knights don’t quit. They don’t give way in the face of adversity, and do what they can. This hearkens way back to the Superman post at the beginning, but Superman is a pretty good example of the kinds of values we see in knights, and I don’t think that’s an accident. The difference is that knights are just people like you and me, though they can have fictional attributes. Valour is important in that it’s something we wish everyone had. We all need help now and again, and when someone steps up for us, it’s a valourous thing. 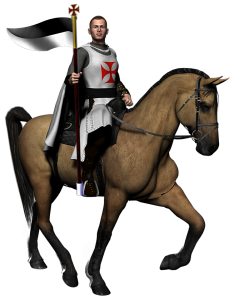 Now, this all seems like a romanticized vision of an uncompromising warrior culture, I’m sure. And there’s a bit of that sentiment. But what makes knights different, to me, is that they’re usually nobody special. King Arthur is the best example, a boy in the right place at the right time who had to learn all of those values. They may be uncompromising, but they’re also flawed, like Lancelot, who compromises his honour and respect by dallying with Guinevere, and lives to regret it. Nobody’s a perfect knight all of the time, least of all me. But when I’m faced with a hard decision, I try to imagine what the knightly thing to do would be, because most of the time, as they’d say, they have the right of it.