Before I actually get into the post, I want to mention that awesome things are afoot. Headshots from the Heart is an internet telethon where I and my compatriots will play Borderlands for twenty-four hours straight in order to raise money for Child’s Play, which donates games to children’s hospitals. The entire event will be streamed, and can be viewed from the comfort of your home. There will be auctions, challenges, interviews, and more, all while we try to survive vicious junkyards inhabited by Jason Voorhees clones. And, instead of donating, you can pledge an amount to be donated per headshot, and let us earn your donation through our skills (or lack thereof). Check it out, and I hope to see you there.

“Trust your gut” is a phrase that I hear a lot. We have a tendency to trust our intuitions, and can recall all kinds of times when our intuitions were dead-on about one thing or another. People will tell you they lack musical talent, or can’t cook, but it’s rare to find someone who doesn’t claim to have a good, reliable intuition. I am one of those people. I don’t trust my gut, and am in fact highly suspicious of letting it do any of my thinking for me. There are lots of reasons for that, but mine is a little odd. You see, I’m colourblind. 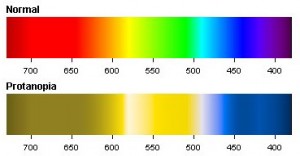 And I mean really colourblind. I got officially tested last year when I got my eyes checked,  and I failed that sucker in just about every way imaginable. I organized little coloured tabs, confident that I had them lined up perfectly, and was utterly dead wrong for every one. I have protanopia, which is the fancy way of saying that I’m red-green colourblind. I can still see colours, but I don’t see the same ones that you do. I got my first hint of this in the first grade, when I coloured a girl’s hair green in a picture. “She can’t have green hair,” my teacher said. “What do you mean?” I asked, “There’s ten girls in our class with green hair.” Needless to say, there wasn’t.

We have all kinds of intuitions, after all. The human brain is the cheapest supercomputer you can get, and everyone’s got one. It processes stimuli through heuristics (think of them as useful algorithms) so fast that all we really recognize is the 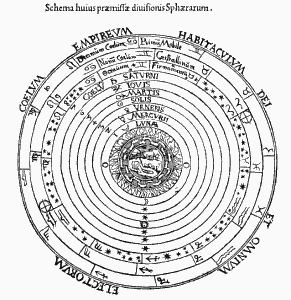 end result. But it still gets things wrong. Here’s an example of something which is completely intuitive and utterly wrong. The sun goes around the earth. Just look at it. Every day you can see the sun come up and the sun go down. The earth stays in the same place, and the sun goes around it. It seems so obvious that there used to be an entire field of astronomy explaining just how all of the celestial bodies interacted in our geocentric universe. Then some jerk invented the telescope, and made some observations. Now you can go online and literally watch the world turn. We had an intuition about something basic and physical like that, and it was wrong.

If intuition isn’t reliable, then it isn’t a good reason to believe something. That is to say that you shouldn’t “Trust your gut”. Trusting our intuitions can also lead to confirmation bias. We have a tendency to want to confirm our intuitions about things, and look for ways of doing that. For example, if you wake up in the morning and feel like it’s going to be a bad day, you can pick out all of the negative things which happen during the day to confirm that feeling, rather than taking the whole day into account. Casinos use tricks to make people “feel” lucky, and help them confirm that feeling by reflecting on the times when they win, without taking into account all of the losses between.

Happily, we have more reliable tools at our disposal. Observation, for instance. It was observation which helped disprove Ptolemaic astronomy, and which helps us evaluate most other claims. Our senses aren’t anywhere near 100% accurate, but they’re more reliable than intuition, and there’s a simple thought experiment to prove that. If you have an intuition about something, and then make an observation contradicts it, you think the intuition was mistaken. We can see that in the shift in astronomy, or just how people can surprise us by doing things we never thought they would. But if you have an observation of something first, and then you have an intuition that contradicts it, you still think the intuition is wrong. You might double check, but as long as the observation holds up, it’s the intuition that you set aside. This shows that no matter when it occurs, we hold the observation to be more important than the intuition.

Even if we have no observations, intuition seems like a pretty bad tool, given the kinds of mistakes it can make. It seems like an incentive to go and try to make some observations, rather than rely on it. What I’m getting at is that it seems apparent to us that in any case, intuition isn’t a good reason to hold a belief. Anyone who tells you to trust your gut might be talking out of their ass.