Wednesday I talked about seeing the We Are Visible mural unveiled in Toronto, and meeting a lot of great people. Life changing people. I’ve met an awful lot of those in the past year, but this one is special. Sometimes I meet people who remind me of really important things that I’ve forgotten, and I want to talk about them because I think they’ll remind you of something similar. I might want to start a segment about this, let me know. If I do, I can’t think of a better person to start it with than Wes Prankard. 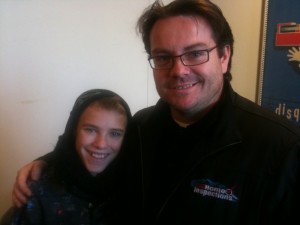 This is Wes. Everybody say “Hi, Wes!”

A few years ago, Wes took notice of the community of Attawapiskat, and decided something had to be done. For those of you who don’t know, Attawapiskat is a native community in northern Canada which lives in third world conditions, and has for years. Recently it declared a state of emergency, because hundreds of of people are literally living in tents. Did I mention it gets down to minus forty Celsius there? Google will tell you more.

Wes started sending humanitarian aid to them, and raised a ton of money in order to build a playground for the children there, because he thinks that every community ought to have a place where their children can gather and play. He doesn’t just want them to have houses, he wants them to have hope. He’s that kind of guy, and you can tell. He does talks about ways people can help there, does walks and campouts to raise money, and…Wait. I forgot an important detail. Wes isn’t the man in that picture up there, that’s my friend Gemil who, while awesome, isn’t Wes. That kid with Gemil? The 12 year old? That’s Wes. He’s the one who’s been doing all this fundraising and outreach, with the support of his parents and his community.  You know what I was doing when I was twelve? Playing Nintendo, reading Dragonlance, and flunking the seventh grade.

Wes reminded me that there’s always more than one way to think about a problem. It’s one thing to think that something is unfortunate, but another entirely to think about how we can make it better. To reimagine our daily activities in a way that can benefit others, like he did with campouts and walks and the like. Ordinary things turned into a means for helping those in need. Now, I don’t want to say that he acts in a vacuum. I had the privilege of meeting his mum, who’s incredibly supportive of his activities, and hearing stories about how people in their community have helped them out. Wes is the focal point, but not the whole picture.

He was right there, so in my face, with a big smile and a talk that he’d no doubt practiced dozens of times, displaying not just a willingness to help others, but talking about the ways in which he wanted to do it, and with results to show for it. At twenty-eight I’m over twice his age, and I couldn’t help thinking “This is what he can do. What can I do?” It made me want to write this post, and pose this question. What can you do? What can I help you do?

You can find out more about Wes and his efforts at http://northernstarfish.org/, or follow him on Twitter.