Voting is not a moral imperative. There are a lot of good reasons not to vote in an election despite the climate of slacktivist patriotism and vote-shaming that surrounds them. But wait, background first. I live in Canada, and we have a federal election coming up here in less than two weeks. Not to dig too deep into it, we vote for parties instead of people, but the person who runs the winning party gets to run the country. There are four parties, only three really competitive ones (the Green Party gets left in the dust), and I don’t plan on talking about any of them.

I advocate voting. I have already voted in this election, actually. But I don’t think that not voting makes someone a bad person, and not even a bad citizen. There are a lot of ways that people are disenfranchised in political systems, and democracy doesn’t solve that by guaranteeing everyone a vote. So here are a few good reasons why a person might not vote in Canada.

Everyone having a vote isn’t the same thing as everyone having a voice. In a lot of cases, there isn’t a candidate, or even a party that represents your interests. The fundamental question of the Canadian Leaders’ Debate series is “Which one of these three wealthy white men would you like to run your country?” Low-income and working Canadians can hear the names of their classes bandied about as campaign buzzwords, but it’s safe to say that none of the candidates, themselves lawyers and professional politicians, have known what it’s like to work sixty hours a week at a dead-end job to feed their kids. For thirty years. While people shame them on the internet for having tattoos.

For a few parts of the Canadian population, it’s worse than that. If you’re a First Nations person in Canada, there isn’t a party that represents you. There isn’t any reason at all to assume that the Government of Canada won’t continue exactly as it has for the past few centuries. Marginalized voices are unsurprisingly the least represented in government, and when no party is going to watch out for your interests, the the act of voting becomes a farce at best. 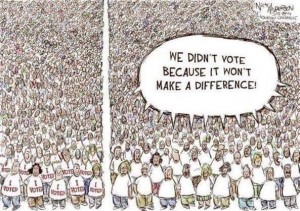 At worst, the act of voting can be morally abhorrent. If every party represents a value or position that’s morally repugnant, then voting for any party means participating in a system that advocates and perpetrates wrongdoing. Even the act of declining or spoiling a ballot becomes a participation in a system that is doing something wrong. Many issues are represented diversely in the parties we have here, but there isn’t a major party that’s anticapitalist, for instance. If exploitation and sale of labour is a thing that gets to you, there is no one you can vote for that will even stand a chance. As well, every major political party in Canada publicly supports Israel’s occupation of Palestine. If that’s not a thing you’re a fan of, say because Israel keeps destroying houses that clearly don’t belong to it, or because of the whole “Occupying the soil of a sovereign nation and enforcing that occupation with deadly force” thing, you don’t have a party to vote for. Voting advocates like to remind people of the power of even a single vote, but it’s a sword that cuts both ways. The vote that put food on a table can put a bullet in a gun.

A lot of this comes down to the fact that the kinds of people you can vote for are the kinds of people who are participants in particular relationships of privilege and power. They are the people on top. In a lot of cases, that places them squarely in the camp of a person’s oppressors, and allows them to shape and guide that oppression rather than working to enfranchise marginalized citizens. Whether it’s through a lack of concern for the well-being of others, outright racism, or even just tone-policing and muddying an issue in the House of Commons, questions of how to establish a genuine respect for rights are transformed into how to relieve certain needs under the watchful eye of the ruling class. I’m exaggerating a bit, but as I’m writing this, the United States Congress is working very hard to dismantle Planned Parenthood, which provides essential services to millions of women. Asking someone to vote for their oppressors is cruel. Expecting them to vote for an oppressor displays our own lack of compassion about their situation. 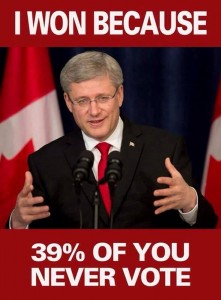 Not voting is a choice

Not voting is a choice, and it’s a very real one. Citizens aren’t merely offered a choice between several candidates or several parties, they’re offered a choice about whether or not they vote at all. It’s easy to say that if democracy matters to you, then you should vote. But what makes democracy matter is that it gives citizens a voice. If voting doesn’t give you a voice, then there are better ways to spend an afternoon. Furthermore, the kind of change that recognizes those voices isn’t voted in. How can it be, when the people who need it most are exactly the people who aren’t heard?

There’s also a myth that if you don’t vote, you can’t complain. You can complain. You should complain. Complain loudly. Complain to the people who voted these people in, and to the ones who cheapen democracy by saying “I didn’t vote for them.” But they did vote. They’re a part of the machine that makes this thing happen. Disenfranchisement is real, and dismissing that disenfranchisement just sidelines those voices even further. “If you can’t vote, you can’t complain” never got anyone to the polling booth who wasn’t already going.

The myth of the citizen candidate

There’s a school of thought that says that if you don’t vote, you should run. You should get involved with activism, advocate in grass-roots movements so that your voice is heard. If you can’t take to it to the polling booth, then take it to the streets. It’s my privilege to know a lot of people who do exactly that. But it is hard. Activism is a lot of work, most of it thankless, and occasionally the kind that gets things thrown at you…or worse. There can be a tremendous cost to activism, and a cost to running as a candidate too. Running a political campaign that’s even remotely competitive can be incredibly expensive, not only in money but in time. It’s easy to argue from the outside that it’s time and money well spent, even if all the candidate does is raise the visibility of the issues they’re involved in, but there’s another side to that. The citizen candidate mentality is a hallmark of oppressive rhetoric. “Convince me,” it says. “Convince me that these are real problems. Take on this extra burden to prove that you were burdened in the first place.” Marginalized voices aren’t responsible for seizing the stage. It is the responsibility of those who hold the stage to make room.

There’s a line of thinking that comes out of this that says “Sure, the above reasons are good reasons, but there are other people who are lazy, or dark cynics, and they are sucky citizens for not voting.” You are the final arbiter of your feelings of disenfranchisement. You. No one else. There are lots of bad reasons for not voting, and lots of bad reason for voting. We can yell all we want about a person’s choice not to vote, but if we value democracy as much as everyone claims to, then we have to admit that they are exercising theirs as much as anyone.

They were given a choice, given a voice, and they have spoken.