Dealing with the Dungeons & Dragons of Life

I spend a lot of time thinking about games. In fact, I even spend a lot of time writing about games. I have a whole other blog about philosophy and gaming, called TPK (blatant plug). It focuses on how we can apply philosophical concepts to improve our gaming experience, but I think that’s a two way street. I think we can use ideas and concepts from games to improve the ways in which we live our lives. Today I want to go over some of those concepts, and talk briefly about how they can assist us. 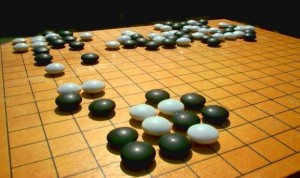 This isn’t exactly a new idea. People have constructed games around useful ideas and used them to learn things about those ideas for a very long time. Chess and go are great examples of this. They’re abstractions from actual warfare, but they promote ways of thinking which can make one an effective general. We can see some really interesting evidence of people doing this even now, where people use the skills they’ve learned in Magic: the Gathering to win poker tournaments. My game of choice is, more often than not, Dungeons and Dragons (D&D), and I think that there’s some interesting things we can learn from how we play it and how we think we should play it. 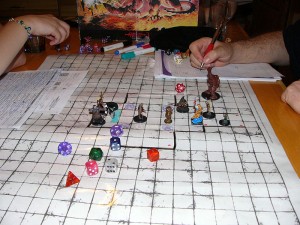 Dungeons and Dragons is a roleplaying game, which mixes strategy elements and theatre. You and a number of friends take on the role of a character in a fantasy setting, exploring it and acting on your character’s desires and values. It’s an action/adventure game, so exploring the setting often involves the characters fighting monsters, sneaking around dark caverns, and waving crossbows. One of the players takes on the role of the GM, moderating the game by adjudicating rule calls and mediating how the characters interact with the setting. In essence, they play all of the people with whom the characters converse, as well as controlling the monsters and the like. With all of that in mind, I think there’s three things which D&D can help us learn right off the bat.

Bernard Suits, in his book The Grasshopper, defines a game as willingly overcoming unnecessary obstacles, and that seems accurate. But in a game like D&D, which seeks to emulate a lot of the dimensions of real life, the act of overcoming those unnecessary and abstracted obstacles can be an excellent way of conditioning yourself to face the real thing.