Imagine visiting another planet, and finding that the natives there had a slight chromosomal difference which affected fifty percent of their population, and resulted in differences in appearance and biological function. Essentially the same, they nonetheless assumed that this chromosomal difference wasn’t simply a biological necessity, but a sort of predestination. It determined their favourite colour, their style of dress, the way they were permitted to wear their hair, their role in the workplace, in the home, and in the political arena. It determined their interests and education, and those who were unwilling to comply with this view of predestination were marginalized and thought of poorly. Imagine that you, as an intrepid interplanetary explorer, began to spend time with the people of this world and noticed that none of them actually met the standards of this predestination. Each person had idiosyncracies that would lead them away from the “right” colour, or the “correct” interests. Sometimes this changed the idea of what the predestination meant, but more often it was restrained out of fear of not fitting in with their peers.

This is what I imagine it would be like for aliens to land on the Earth. We have taken a chromosomal difference which may have once served to divide certain jobs as a hunter gatherer culture, and blown it so utterly and ridiculously out of proportion that we have somehow managed to tote this piece of awkward sociological baggage into a post-industrial society. What I do not understand about gender is why it is even still a thing. It seems to me that, for all intents and purposes, it causes more harm than good, divides us in utterly illusory ways, and should have been culturally jettisoned thousands of years ago.

Sex/Gender
The first thing I need to point out is that there’s a difference between sex and gender. Sex is biological. It’s what your chromosomes signify, and while it’s not as precise as we might like to believe, it certainly has enough chemical differences to be a real difference. Male, female, and intersex are the usual classifications, and they’re useful medical generalizations. Gender is the social construction we build around the differences we see between males and females, the story we tell about what those differences mean. We use words like masculine and feminine to describe them. In western society, it’s masculine to play with action figures, and feminine to play with dolls. Feminine to be passive or demure, and masculine to be aggressive or assertive. This isn’t semantic voodoo, but common terminology.

Feminism
It’s also impossible to talk about gender without talking about feminism. Feminism is the dialogue of gender politics, and contains the clearest examples that gender has resulted in literally thousands of years of oppression and near slavery all over the world. Did I mention that it’s still going on? Note that the tone of that article takes it as a marked improvement, but doesn’t mention that women there still might get stoned to death. And many of the places where discrimination happens are not made of sand and religious extremism. I submit that the goal of feminism, the endgame as it were, is the eradication of gender. If people of all genders have equal rights and equal opportunities to pursue their interests, then the distinction of gender becomes entirely meaningless, semiotic artifact to be dusted off when we think of how messed up we used to be. This post isn’t about feminism, but they have a lot to do with each other.

I liken the myth of gender to the myth of race, because we use it to create mythical stereotypes that manage our expectations, and the fact that we do so is considered to be so innocuous that it passes us by. Let’s examine some phrases that I hear more often than I’d care to admit.

“Oh, you know how it is with women.”
This is a phrase which says exactly nothing and is usually used to dismiss the interests of another person. It’s used to marginalize people, and I don’t think anyone would like to be passed over in such a manner. Let’s add an adjective, but keep the structure otherwise the same. “Oh, you know how it is with black women.” Well, that’s clearly a racist generalization, implying that there’s some sort of behavioural link to the melanin content of someone’s skin. So why is the first more acceptable? Maybe it’s not, and I’m off base here. Let’s look at something that seems more positive. 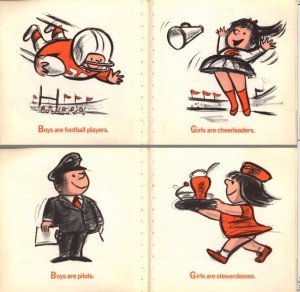 Where this really becomes a problem is when gender is used as to shield people from responsibility for their actions. The phrase “Boys will be boys” is often used by people in authority to excuse the actions of young men who are often acting irresponsibly, as though acknowledging that it’s somehow part of their nature, and therefore excusable. As though accepting that being male is somehow a good justification. Similarly, when men’s eyes wander over the curves of a woman, and they say “I’m a pig. So? I’m a guy.” Surely we wouldn’t smile and nod knowingly if (to abuse a stereotype for the purposes of an example) someone’s house had been burgled by some young black men, saying “Black boys will be black boys.”

An argument could be made that gender ideas are trends which everyone follows to one degree or another, with some outliers, but that seems irrelevant because the trends themselves are artificial, and so are the expectations they create. Being told that Pepsi and Coke are the only two drinks does not make it true that they are. Similarly, being told that wearing dresses is not allowed discourages males from wearing dresses.

Gender is a way of sorting people, and it’s a bad way, because it makes all kinds of inadvisable assumptions. There are a lot of better ways to sort people, and it’s possible to do so based on distinctions which are actually real. For instance, I’m a friend, a student, a gamer, a blogger, a writer, a family member, and a cat-owner. I’m a lover of science, philosophy, art, comic books, and food. Any of these categories can be used to differentiate me from someone who isn’t those things, or is in a different way than I am. All of those categories together create an accurate picture of who I am. Am I a man, in the sense of being masculine? No.

But there could be some hidden value to gender that I’m not seeing. Some meaningful way that it tells us about people, or about the world and helps us be inclusive rather than exclusive in a manner that’s healthy. Let me know in the comments below. If you haven’t found one either, then let me ask you this: if you’re not your gender, what are you? I look forward to hearing from you.