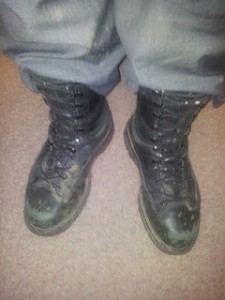 My boots aren’t really a word, they’re a thing. But there’s an idea which goes along with them, and that’s what reminds me of what’s important. You see, I have a pair of Canadian Forces issue combat boots. I’ve had them for about seven years, and they’ve taken me a lot of places. They came with me on my first trip out of the country, to a conference down in Michigan. They carried me over thirty-six kilometers a week as I worked full time and went to school. I attended my mum’s convocation in them, a few weddings, and even crossed the stage at my own graduation in these beat up boots. They’re light enough to run in, incredibly comfortable, warm in the winter, cool in the summer, and utterly waterproof. They also make a weird squeaking sound on the floors of my department, so it’s not all up side. But none of those are the most important thing about them.

In Sacred, I talked about how tying my boots is a ritual. When I lace them up and tighten the captain bars at the top, it means I’m ready to face the day on my feet, and strengthens my resolve. And that’s part of why I bought them. They were my first pair of really good shoes that I bought myself, with money that I’d earned on my own. I wanted a pair that would last, something that would be strong and take me places. If they were designed for people who got shot at every day, I thought, they’d last me a lifetime. And they just might, at that. They made me feel stronger, more sure of myself, like I’d last a little longer too. But even that’s not the most important part. 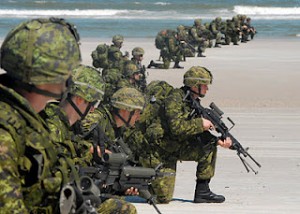 See, the most important thing about my boots is that they mean I never have a bad day. Never. Not since I bought them when I was 21. It goes along with who they’re meant for. There are soldiers wearing my shoes. No matter how bad my day is, no matter what kinds of issues I’m experiencing, odds are good that none of them involve bullets. But that isn’t true for someone else in my shoes. Someone else in my shoes is putting themselves in the line of fire. And indirectly, they’re doing it for me. They’re training in the ways of war, hardening their bodies in preparation for defending my way of life. When I think about that, I think that no matter how bad my day is, one of theirs is probably worse. But they’re still doing their best to do it, and the least I can do for all the people in my shoes is do the same. Who’s in your shoes?