Two weeks ago I talked about how I leave tasks to Future Jim, sometimes because I don’t have time to do them and sometimes as a method of passive-aggressive procrastination. After some research I found that the existence of Future Jim is compatible with the way we understand time, so he’s sort of a real almost-person. But if he’s a real person, what kind of obligations do I have to him? Future Jim might not be some jerk who never does what he’s told. Instead, I might be the jerk for foisting my responsibilities on him. I want to take a poke at that today, using my favourite ethical framework, stakeholder theory.

To summarize, stakeholder theory says that we have an obligation to respect our stakeholders, where I stakeholder is anyone whose rights are in a position to be respected or violated by the agent in question (In this case, me). It doesn’t get into how those obligations work, but it sets up that they exist, which is all I need for right now. Is Future Jim one of my stakeholders, and if so, what rights does he have? 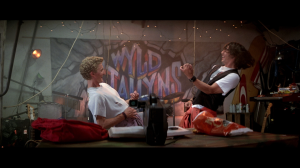 The intuitive answer is that he isn’t. He doesn’t exist, after all. He’s just a possibility. There might even be an infinite number of Possible Future Jims waiting for me to step into their shoes. But none of them exist yet. They’re not real. The only Future Jim I care about is Actual Future Jim though, and there’s only one of him. Explaining to my roommate that I washed the dishes in a different possible future doesn’t go very well, so relying on Possible Future Jim usually causes trouble for Present Jim.

Actual Future Jim can own property and has the rights of a person, presumably. He’ll inherit everything I have when I become him. He’ll have rights and responsibilities and moods and all the things that come with being a fully formed human being. Not now, but some day. It seems uncontroversial to say that we can be beholden to people that don’t exist but will one day exist. It’s reasonable to think we have a responsibility to future generations of humans for instance, especially regarding the environment, climate change, civil rights, and other major societal issues facing us today. This can apply legally, too. You can will things to hypothetical people. For example, “If Billy and Sally have a kid, give their kid my wand when he turns ten and applies to Hogwart’s.” I wouldn’t use that as legal text, but you get the idea.

There’s a pretty big difference between unborn people and future versions of ourselves, though. Unborn people are separate agents with separate lives, but Future Jim is basically me. He has all my DNA, all my memories (more of my memories, probably) and the majority of my attitude. He’s not my son, he’s me three hours from now. He’s not quite a legal person per se, but he’s close enough to make things uncomfortable. He’s real, that’s for sure. The only instance where Future Jim doesn’t exist is if I die before I get there, in which case I wasn’t going to wash those dishes anyway. And I’m in a position to affect his rights. His safety, privacy, and well-being are definitely within my grasp. I’ve got him by his mantenna array, as it were.

So he’s a stakeholder. He’s vulnerable to my actions, and has some recognizable rights that I can respect and violate. Well, I’m a big fan of best practice, so really, getting down to brass tacks, what’s the best practice when it comes to passing jobs on to Future Jim? I obviously can’t pass everything on to him, because it can’t all get done. He’ll have his own responsibilities, so everything I leave for him to do is one more thing on his plate. It even seems reasonable to think that I don’t really have the authority to pass things on to him, in the same way that I don’t have the authority to pass things on to you. You’re not beholden to me, after all. Let me try out a sentence here.

“It’s only best practice to pass things on to Future Jim if they create greater opportunity for him.”

I mean, there are some things I have to get Future Jim to do. Present Jim can’t do everything either. Future Jim has to prepare for meetings, write things, sing songs, etc. But as Present Jim, it’s best to act in the service of Future Jim and take him into consideration when I’m procrastinating, as much as that might suck for me. Some things take more work but can open up whole new worlds for Future Jim when he becomes Present Jim, and it’s sort of my role to steward the present for him in the same way we hope to steward the planet for future generations.

Future Jim might be lazy, but he inherits that laziness from me. Damn.