I did not always properly appreciate the transformative properties of trousers.

When I was seventeen and sharing an apartment with five guys, rule #2 of the apartment was “PANTS!!” Born of our desperate fear of seeing a dong that didn’t belong to us, we were men who did man things and that meant not having pyjamas or existing in any non-manly state (though as a group of dorks, our state was uniformly non-manly). In university, I treasured pyjamas. Those days when I could remain inert were the most wonderful. Much World of Warcraft was played. It wasn’t until late in my undergraduate degree that I started using the mystical properties of pants, and not until grad school that I was really prepared to do it. I still haven’t mastered this trouser power, judging from the days when I sit around in my pyjamas thinking about how I should get dressed. 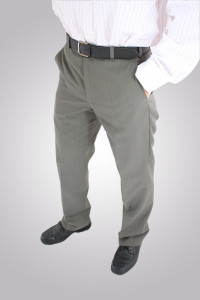 “PANTS!!” has gone from being a homophobic constraint to a rallying cry on those chilly days when my bed beckons, or just twenty minutes of early morning gaming becomes an all day pyjama extravaganza. Sometimes this is alright, but it also tends to put more weight on Future Jim, who we’ll leave until next week. Food doesn’t usually get cooked in pyjamas, and dishes certainly don’t get done. Cleaning might happen, but it spells certain doom for any plan involving exiting the house.

For me, pants are magical. Trousers have a deep and transformative power. They make me into a different person. A better housemate, a person who exercises, who thinks about wellness and occasionally actually opens his mail rather than letting it pile up on his keyboard like a chump. A serious man who thinks serious thoughts some of the time. It’s not just pants, with pants comes a shower, and socks, and on a big day maybe even a shave. They transport me to a world where I’m going to leave the house and get things done.

I don’t think that’s at all abnormal, I think we all have catalysts that helps us get going or recover our focus, and pants seem like a pretty sensible one (given that it’s -25 Celsius with the wind chill right now, leaving the house without pants would not be my wisest decision). What makes it interesting to me is that I’m not really tied to clothes in any other part of my life. I don’t care what kind of pants they are, the style, brand, or even colour. Sometimes pants means a nice pair of dress slacks, and sometimes it’s that pair of old American combats that I’ve had for years and cannot kill. But they tell me that it’s time to stop messing about and get serious, even if it’s just to get serious about messing about.

Were I to introspect, it’s probably because I recall many, many days of sitting in my pyjamas and doing very little, and those are days that I don’t want to repeat. A pyjama day is needed now and again, but more and more of my days are pants days. It’s kinda nice. My pants are the things that get me focused. What brings your day together, and why?