It took me a long time to figure out makeup, and why it’s interesting and important. As a burgeoning academic, I spent rather a lot of time being unconcerned with appearances, and that’s what I thought makeup was. It was a thing you put on to augment your appearance. Which isn’t wrong, I suppose. The question is why. This isn’t an argument about whether or not people should wear makeup, but an explication of its power, and where I think it comes from.

I’ve noticed a tendency to regard makeup as a means of covering things up, erasing flaws and concealing a person’s true features. It’s a mask, though it’s the subtlest of them. It gives you a different appearance. Appearances, especially those of women, are a matter of great concern now, it seems. There’s pressure on women to wear makeup, and a whole lot of norms concerning what to wear, how to wear it, and how much is too much that change depending on location and company. I’m not going to pretend I understand or experiences those pressures, but they’re real things. Given that, it’s no wonder that we see it as an imposition on body image and often a concession to societal norms. That was what makeup was to me for a long time, fashion for your face. The thing you wore because you were expected to.

And then something funny happened, as it often does. I started meeting women who weren’t as concerned about things. Independent women, strong women, the kind you meet when you grow o 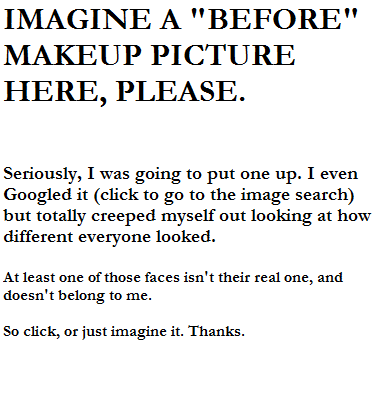 ut of your iconoclastic teenage phase and start hanging out with actual adults. But they still wore makeup. Not all of them, and not all the time. It bothered me. “Surely,” I thought, “They’re the victims of a great deception. I should explain the conspiracy that is makeup to them, and save them from it.” This went about as well as most instances of mansplaining do, which isn’t very well at all. Finally, someone got through to me. “Why would you want to cover up your real face?” I asked. You know what she said? Of course you don’t, but you also know I’m going to tell you.

Makeup is a mask, but you don’t just use masks to hide things. You can use masks to show things. They can show mystery, or comedy, or highlight certain features while downplaying others. Batman’s mask does more than hide his face and scare criminals. It shows the world that he’s Batman, so much so that anyone with a similar mask looks like Batman. It makes him feel like Batman, and the act of donning it reminds him of why he’s compelled to do what he does. He remarks at several points that Bruce Wayne is the mask, not Batman. 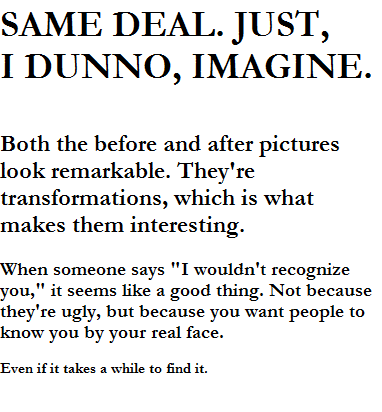 Your real face isn’t necessarily something you cover up, it can be something you put on. That’s what we used to call applying makeup, “Putting on your face.” Your real face is the one you choose, not the one you were born with. Whether it’s makeup, haircuts, or trimming moustaches, we all modify our faces. We smooth away the edges until we get the face we want, not the face we have. And that’s awesome. After all, why settle for being the person you were born when you can be the person you’d like to be? We modify our bodies in all kinds of ways to get them to where we want. We exercise, change our diets, pierce them, tattoo them, paint them, dress them, and augment them with technology, from artificial limbs to glasses.

There are a lot of reasons to wear makeup, or do any of those things, and they get pretty complicated. I’m not saying that everyone who wears makeup is doing it because it’s part of what makes them the person they want to look like. But if they don’t offer any other reason, we should probably take them at face value.