Last week I mentioned that I found a number of strange pieces of philosophy in some kids’ movies I watched earlier in the week, with my charge. All of them were good, but they also raised some interesting distinctions that I’d never noticed before, and the first one I wanted to write about was Kung Fu Panda, which really showcases the difference between violence and fighting.

What draws out the distinction in the film is the fight between Tai Lung and Shifu. Tai Lung doesn’t just want to defeat Shifu, but to break him, and then kill him. There’s lots of fighting in the film, but Tai Lung goes beyond fighting and into genuine violence. We see Shifu bruised and beaten, but Tai Lung doesn’t stop until he’s tempted toward a more important target, the Dragon Scroll itself.

There’s a tendency to equate fighting and violence, both in media and in real life. This isn’t unwarranted, either. Violence is something we have experience with, and most fighting in real life is of the violent kind. But there are a lot of clear examples where that’s not true. Where you have the fighting, but not the violence, and those help us pick out the necessary differences. Karate tournaments, for example, are full of fighting. Trophies are given out for sparring, which means defeating your opponent through fighting. But that isn’t the same as hurting your opponent. In fact, there’s an incentive not to. Giving someone a serious injury can result in disqualification, and certainly so if you do it on purpose. The judges aren’t measuring your ability to cripple or kill a human being, but how you react under pressure, and your ability to overcome them. Martial arts isn’t about brawling, but about discipline, which means being in control of your body enough to make contact without doing genuine harm. 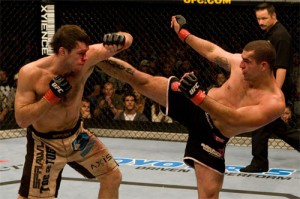 The Ultimate Fighting Championship (UFC), is  another example of this kind of fighting. With less rules, it certainly tests the boundaries of fighting, but ultimately, the goal of each competitor isn’t to harm their opponent, but to win. The fighters use submission holds to subdue opponents, and as soon as the opponent taps out, signalling their surrender, they’re released. Giving them one last burst of pain is considered bad form precisely because it crosses the line from fighting into violence.

The origin of an act of violence lies in the intent. We recognize these acts because they’re intended specifically to harm another creature. Sometimes there’s doubt about whether the intention was there, but regardless, that’s how we pick them out. That’s why we don’t get upset when we see kids play wrestling, but do when one kid gets on top and socks the other in the mouth. Think about the Mighty Morphin’ Power Rangers, or almost any other kids’ show that has fighting in it. The Power Rangers fight a new monster every week, but there’s never any sense of it being violent. The monster’s intentions are abstract, like conquering the world, or just completely ridiculous, like feeding everyone hypnotic bubblegum. The genuine intent to hurt people doesn’t seem to be there, partly just because the character doesn’t have enough development.

The advantage to recognizing this is that it means that other things can be acts of violence. You already know that. People use words to hurt others, and that’s an act of violence. You can do it with money, with humiliation, and in a lot of other ways. What picks them out is the intent to harm, rather than the action that’s taken. Kung Fu Panda reminds me of that distinction, and shows the kind of tension you can get when you use violence in a narrative, rather than just fighting. But most kids’ movies follow Jackie Chan’s film philosophy. “Lots of action, no violence.”