This one’s almost Pulp Philosophy, but it’s more feelings than philosophy. We all have teachers, the people who instill in us specific lessons about life, the universe, and everything. They might be writers we follow, friends and family, or actual instructors in a classroom setting. In the same way, we’re all teachers. We want to be, setting examples and hoping to make an impact on people’s lives. We want to be the kind of person whose lessons people will carry around with them. And we do carry those lessons around. We cart them from place to place, both good and bad, sometimes using them and sometimes not. But they’re always sort of there. Maybe it’s the student in me, but I’ve had a lot of teachers. Some of them knew it, some of them didn’t. So has the Black Canary.

A crime fighter and nearly peerless martial artist, she studied with all manner of senseis over her career, while going toe to toe with some dangerous supervillains. She’s not super strong, fast, or bulletproof. Her power is that she makes a loud noise, her Canary Cry. All the rest is grit and gristle. And plot armor, of course. She did a lot of work with the Justice Society and Justice League, but I think she really came into her own when partnered with Oracle (formerly Batgirl), in Birds of Prey. 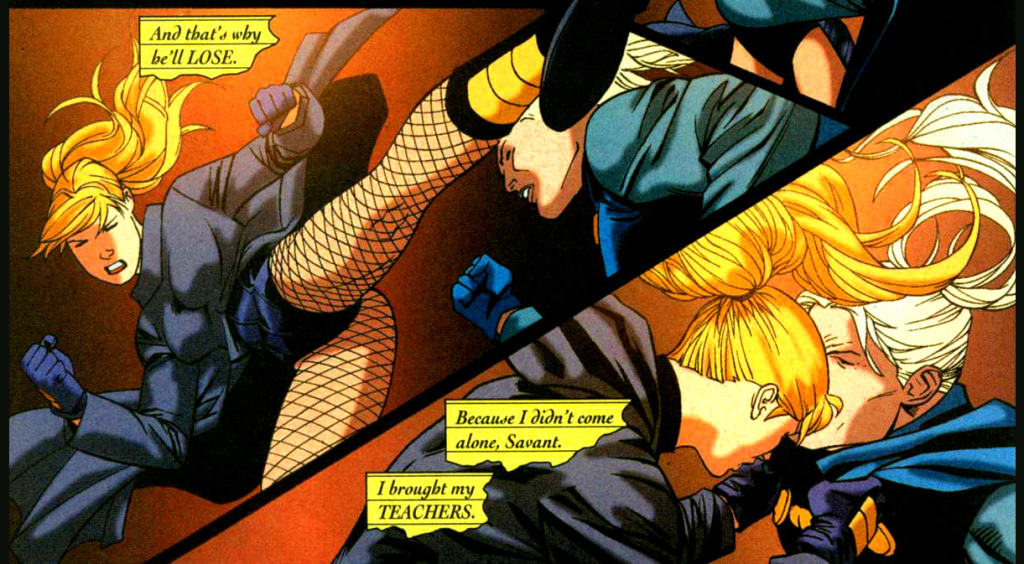 In this scene, she’s facing down Savant, a sociopathic blackmailer who held her hostage. She remembers her teachers, the movements they taught her, the sharp blows, holds, and nerve strikes. But at the same time, she forgets some of their other lessons. The scene isn’t a fight or a climactic confrontation, it’s a beating. While using her lessons, she forgets others. Most of the people she trained with are superheroes, people who hold themselves to high moral standards, standards she leaves behind in this particular encounter. One of the responsibilities of learning and mastering martial arts is learning when to use it and, more importantly, when not to. This isn’t the beginning of a descent into madness and villainy, it’s probably little more than a one-off comic that needed an action scene, but it talks to me.

We all have lessons we wish we’d follow more often, I think. Whether they’re from role models, teachers, or religious leaders, there are things we wish we kept in mind more often than we manage to. You know what they are, they’re the lessons you try to call to mind when you’re really struggling, or the one s that you think of when a solution becomes apparent and you go, “I already knew that. I should’ve figured that out way back.” Sometimes I see us as unique composites of all the lessons we’ve learned, or at least all the ones we can call to mind and fit in our heads. I suppose it goes back to the part where we’re all just muddling through things as best we can.

It’s also a source of strength though, and that’s something she draws on. She’s not alone. There isn’t a moment when she can’t connect with those people, the ones that mean the most to her, whose lessons ring the clearest, by calling to mind the things she learned from them. I do the same thing, when floundering in the long, dark tea-time of my soul. I think about my professors, my friends, my role models, my heroes. Also all the people I don’t want to be like. I think about all the pieces they’ve left inside me as our lives came together, and I think “How could I ever be alone, when I have all these teachers?”