The second movie we watched was Happy Feet, about a penguin who loves to dance. It’s pretty good, with a lot of commentary on acceptance and religion, but also on sex, which is odd for a movie made for kids. Lots of movies have a love story, to the point where the ones which don’t are considered odd, but very few of them focus on the sexual elements of romance. The epilogue of Aladdin doesn’t see Jasmine with a whole batch of kids, and the scene doesn’t fade to black on Prince Charming and Cinderella in the bedroom. Instead, these movies tend to end the same way Shakespearean comedies do, with a wedding. Happy Feet is a little different. 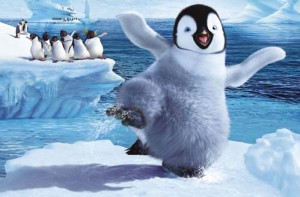 Mumble is a penguin who loves to dance, which makes him an outsider because penguins are supposed to love to sing. His dancing offends the elders, who worry about the wrath of the Great Guin. He wants to be with Gloria, the girl he grew up with, and has a number of adventures out on the Antarctic ice looking for friends, meaning, and why the fish keep disappearing. The movie has a number of great songs and musical medleys, as well as a number of great actors including Robin Williams, Elijah Wood, and Nicole Kidman. It’s a pretty good movie, and I recommend it.

What I noticed about it though, was that the songs and writing talk about sex, rather than love or romance. The story begins with Mumble’s parents, who fall in love and then have an egg, as the narrator notes. As Mumble grows up and reaches maturity, he starts to notice Gloria. They use songs like “Let’s talk about sex” to illustrate the kinds of things going on in his head. Later, on his adventures, he comes across a different species of penguins in the throes of mating season, and makes some friends with some penguins who are cruising for chicks.

When Gloria follows Mumbles into exile, he questions why he’d want to be with her if they couldn’t have an egg together. Of course, all’s well that ends well, etc.

These aren’t the hallmarks of romance. Romance in kids’ movies like Aladdin or Cinderella, while it treats women unfavourably, doesn’t make them the means to some other end. In Happy Feet, Mumble doesn’t want to win Gloria because Gloria is the one, but because she’s the one who will give him an egg. It’s sex for breeding rather than pleasure, but once that idea becomes central all of the romantic moments take a backseat to it. This isn’t as uncommon in films targeted toward adults, where the characters start off looking for ex and various antics happen to teach them lessons. Movies like American Pie spring to mind. It’s unexpected to see that kind of thinking in a movie with such a young demographic though. It could be a case of “The kids don’t get it”, but it’s central to the characters, and they don’t use innuendo, instead talking about it directly.

The key difference is in what the relationship focuses on, and how it regards the participants. If you think about it like a Kantian, then Gloria is merely a means, while Sleeping Beauty is an end, though not an end in herself. She’s just the object of someone else’s desires. Neither of them are healthy relationships, but healthy romantic relationships aren’t exactly the hallmark of kids’ movies in the first place. But I’ve never seen one quite like Happy Feet. What are some skewed romances that you’ve seen in children’s media?