I had another post set up for today, but this came through my feed, and I wanted to jump onto it while it was hot. From the Institute of Play, I learned that educators are using Minecraft in the classroom to teach digital citizenship. Since my friends and I just started a new Minecraft server, I’ve learned a few lessons about this recently. Is it a good idea? Probably. Today I’ll discuss why, and why Minecraft is probably the best tool for this.

What is Digital Citizenship?

First, what’s digital citizenship? Simply put, it’s the ability to share spaces and get along with other people online. It includes resolving disputes, thinking of other people’s interests, and sharing common goods. You know, not being a dick. Well, it’s actually more than that. It’s also about being able to collaborate with people on things, and understanding your stake and place in a larger community.

There are lots of different kinds of online communities. Facebook is an online community. So is Wikipedia. So are forums and message boards. But Minecraft is better than any of those, demonstrably so.

Educational games suck. I’m just going to come right out and say it. If you’re a parent, and you’re looking at educational games, they pretty much all suck. Bookworm Adventures is good, but it’s the exception to the rule. On the other hand, lots of real games are built to teach people things. Portal is one of them. You can evaluate every puzzle by asking “What is Valve teaching me here?” So is Minecraft. Every new task is a puzzle to solve, and the game is as hard as you make it. 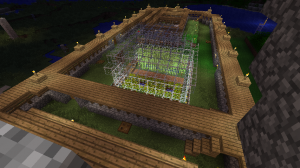 In Minecraft, you’ll have a space that’s yours. It might be a house, a cave, or a hole in the ground, but it’s yours. One of my friends built a castle in the tundra with walls made of lava. One of them has a glass compound in the desert. I built a wooden cabin on the shore of a lake, but even before I had a cabin, I put up a little sign that said “Jim’s Lake.” And with claiming territory comes territory disputes. Dan didn’t see my sign, and moved in under the lake on the opposite side. Eventually we settled on an equitable distribution, and agreed to share local resources. Still, eventually I had to move, because he’d mined all the precious stones from our shared cave system.

In survival mode, you have to recognize a common good. When we started the server, there were nine of us, and we had less than twenty minutes to secure food and shelter before night fell and monsters came to eat us. We worked together to build a safe haven, each of us finding a role to which we were suited, whether that was farming, tending animals, building a shelter, or mining resources. Only when everyone’s safety was assured did we head off in our own directions and work on our own projects.

We still maintain that safe haven too, adding to it for new people who join the server. The crops, trees, and animals are a renewable resource, which means that anyone who takes them is responsible for replanting and breeding, in order to ensure there’s something for the next person. You don’t need to cooperate to succeed in Minecraft, but your life is made orders of magnitude easier if you do, just like in real life. The sooner kids learn how to do that effectively, the better off they’ll be.

4. The Stakes Are Real

The reason the last two principles function is because in Minecraft, the stakes are real but they’re not too high. People can, on purpose or by accident, destroy the things you’ve built. But anything that can be built can be rebuilt, often with improvements. People can kill your avatar, take your things, and throw them all into lava. Things that you spent a lot of time making and searching for. In Minecraft, you have something to lose. There’s a temptation to shrug it off as only digital objects, but if we do we fail to really appreciate their value. Imagine you’d written a novel, and someone, accidentally or on purpose, deleted the only copy of it you had. It’s just ones and zeroes gone, right? Well, ones and zeroes along with a lot of time, effort, and energy. You could rewrite it, but it’d take just as much time, if not more.

Minecraft pushes people to be good digital citizens because it’s the best way for players to protect their own creations and ensure that their belongings remain unstolen. On a message board or Facebook, the stakes are less important, because you’re not necessarily putting anything real on the line. Words can be carelessly thrown about, but in Minecraft, every block has to be placed deliberately.

I’ve written about Minecraft before, and I’ll do it again in other places, I’m sure. I’m not sure about all of the ramifications of the idea of Minecraft in the classroom, but it’s pretty clear that it has something to teach kids about being good digital citizens, which is a lesson worth learning. What games do you play that help you learn things?