It’s been a while since I wrote a thing. Podcasts sure, but I have Huck to kick me in the pants for that. I haven’t written a thing. Anywhere. Here, at TPK, on my own site. I’m always a little burnt out after Headshots from the Heart (where we raised $4000 for children’s hospitals and domestic violence shelters, which is amazing), but always fall back into the swing of things, with videos, posts, and the like. It’s the longest break I’ve taken in years, and not making the jump from meaning to write to actually writing has really been bothering me. So I thought I’d write about that.

Last year I wrote a post about writer’s block, and I stand by it. I don’t believe in writer’s block, it’s just a mix of laziness, excuses, self-doubt, and other things. I’ve certainly got my fair share, but lately I’ve found it tricky to be creative and think of things to write. As things take shape into larger art projects, I take more time with them and I hem and haw over what makes the cut and what doesn’t. How does it fit into my artistic practice? How do I manage the time spent writing with all the other things in my life? I want to make music, volunteer, play games, make videos, help friends, and I still have to work for a living despite what my spam emails tell me.

I don’t have any really good answers to those questions, by the way. Beyond “I’m gonna make it work because writing things helps me think about things and gets me making things.” I suppose the lesson I’m learning from all this is that disciplined creativity isn’t just a habit, it’s several habits intertwined. Having ideas is sort of easy. Dress up like robots and rap battle in a park. Drink hot sauce and do readings from famous plays. Write fan fiction about your friends. But the routine of thinking of neat ideas is distinct from the routine of making those things into actual things that fit together and do so consistently. Blogging, writing, videos, music,the practice of them can’t be once in a while, and it can’t be when you feel like it. The routine matters. Creating when you don’t feel like creating matters, and the worst feeling is not doing it.

Actually the worst feeling is probably being waterboarded, but knowing what you want to write or make or create, knowing that you can and have the time, and then not doing it, that’s pretty up there. Chuck Wendig, whose intrepid writerly ways I adore, says “The easiest thing to do is not write,” and boy is he correct. Not writing is simple. You’re probably doing it right now. But things need to be made. Art needs to be shown, songs need to be sung, books need to be written.

It’s November, which means it’s National Novel Writing Month, so tens of thousands of people are taking the month to write, breathing life into a brand new creative routine at 2000ish words per day. Only some of them will finish their book, and almost none of them will have their novel published, but it doesn’t really matter. They embraced the routine, and they’re throwing themselves into making a thing. It’s really kind of super cool.

I suppose all this really hinges on the distinction between making art and being an artist. You can make art whenever you feel like it. You can take a class, paint a picture, take a month to write a book, it’s a vacation from your normal life at best, an escape from it at worst. That’s making art. Being an artist is a discipline. It means making art all the time, 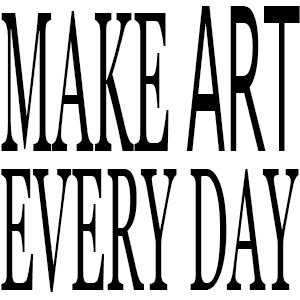 even when you don’t want to. It means getting up early and putting pen to paper, and staying up late finishing a song because you’ll lose the notes by morning. Being an artist takes lots of other things too, but creative discipline is essential. I’ve struggled with that for a while now, and I think it’s something a lot of people like me grapple with as we try to grow up into big kid artists.

So make that thing. Don’t worry about it. Don’t let your life get in the way. That thing you need to do, that fan-fiction you need to write, that movie you want to create, fucking make it. Make art every day.